About the City's Development Review Process 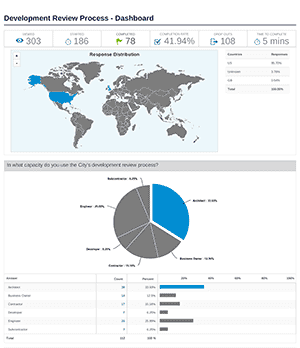 The Development Review Process is the process by which developers work with the City of Springfield to ensure their project meets the needs of the developer as well as follows the regulations and policies of the city while minimizing the costs of design, review and construction.

Collaborative Community Development (CCD) is the City's philosophy for working with private developers and designers in developing the community. The philosophy is based on the premise that by working collaboratively, the results will be high-quality and timely development projects.

By bringing together the expertise of both the developer's team and the City's team early in the process, the efficiency of the project should be improved.

City departments involved in the Development Review Process include:

City staff is not part of the developer’s design team, but City staff will suggest approaches to developing a design that can be approved because it complies with City regulations and policies. City staff is involved in the project design through the pre-application process (pre-app), which is the most important step for achieving a high-quality project.

The pre-app is the first opportunity for all of City staff to learn about the project and allows for early input from city staff before significant time and money have been expended on the project design. The pre-app is where designers learn about City regulations and policies and any on-the-ground information the City may have. The city may also provide ideas on how to approach design issues, but it is not City staff’s role to design the project.

This assumes that the correct information was provided by the developer during pre-app. Some projects, such as zoning applications, require neighborhood review and comment in conformance with City Council policy for developer / neighborhood meetings. This is the neighborhood’s opportunity to discuss issues with the developer before the project is reviewed and approved by the commission, board, and council.

The developer is expected to respond to, but not required to resolve, all issues raised by the neighborhood. Staff will support applications that comply with city regulations and policies regardless of support or opposition by the neighborhood. Council will hear public comment and respond as required.

The City’s involvement in the construction process is through inspections that ensure the project complies with the approved plans. The goal of the City is to have no surprises between the formal plan review and approval and the inspection process. Again, this assumes that the correct information was provided by the developer when the plan was reviewed and approved.

An additional important component of CCD is continual feedback regarding the quality of the process. For every development project, participants are requested to provide feedback on how well the participants believe the project review, approval and inspection was performed.
/QuickLinks.aspx
Jobs
Report a
Concern
Start a
Development
Project
Notify Me®
Watch Live
Meetings
[]