Residents in the Midtown neighborhood voiced their concerns and shared positive thoughts about their neighborhood Monday evening, May 18, at the seventh of nine “Community Listen” events organized by the City of Springfield.

Most of the City’s departments were on hand to answer questions, including Director of Building Development Services Chris Straw, Police Chief Paul Williams and 911 Emergency Communications Director Zim Schwartze.

City staff handed out Walmart gift cards and T-shirts boasting “North Side Pride” and encouraged participants to take part in a “renaissance” of the City’s historic neighborhoods.

City Manager Greg Burris led the group through a series of somewhat sobering “intensity maps” that illustrated some of the challenges in the Midtown neighborhood and the rest of the City’s Zone 1. Zone 1 is the northwest quadrant of the City. 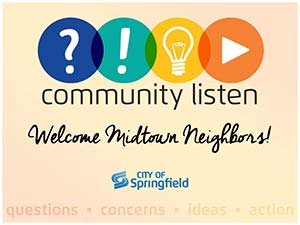 To start off the “listening” portion of the evening, Director of Public & Civic Engagement Cora Scott shared findings from the City’s most recent Citizen Survey, which outlined the priorities of survey respondents from Zone 1 and satisfaction ratings for various City services. Participants offered suggestions about what things they would most like to see fixed in the Midtown Neighborhood. The top five issues will be incorporated into a plan to address issues in Zone 1. Burris said he expects a plan to come forward after partner agencies meet with City officials in late June.