Zone Blitz is only one initiative aimed at improving quality of life for Springfield residents. Other related initiatives include work by the Impacting Poverty Commission, The Northwest Project and more. 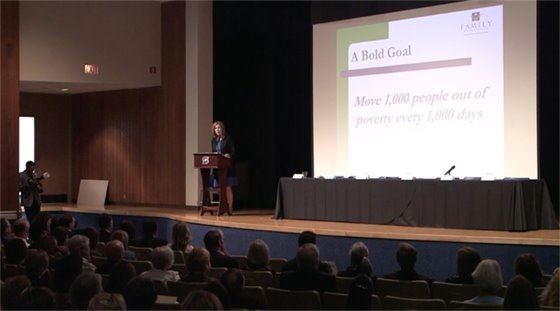 Pictured above right, Dawn Lockhart, president of Jacksonville, Florida-based the Family Foundation, was the keynote speaker at the Community Summit: Focus on Poverty. Lockhart spoke about the "1,000 in 1,000" program, which aims to lift 1,000 people out of poverty in 1,000 days. Springfield leaders hope to implement a similar program in our community.

The Impacting Poverty Commission announced a goal to curb the growth and decrease the percentage of Greene County citizens living in poverty from 20% to 15% by 2025. At the current rate of increase, Greene County’s poverty level will grow from 20% to 25% by 2025 if no action is taken.   IPC members recommended the launch of a task force tasked with taking a deeper dive into the issue of transportation. The IPC Steering Committee –  whose charge is working with responsible sectors within our community to help coordinate activities, assist in tracking and report results, and advocate for meaningful change – has had two meetings. The committee identified key leaders in each sector and plan to meet with these leaders to ask them to help 1) create a speaker’s bureau to help spread the word about poverty issues in our community; and 2) communicate with the committee about work already addressing poverty, identify gaps and solicit ideas about how to fill those gaps to reduce poverty.  The committee also discussed recruiting one or two key community leaders who could act as “champions" for this important community issue. The next steps include developing data collection and reporting systems and discussing a communication plan and ideas to keep the issue of poverty alive in our community and with local media.

Community Foundation of the Ozarks announced the launch of The Northwest Project, the purpose of which is to move families out of poverty and into a sustainable financial state by creating a comprehensive and collaborative system for addressing individual causes and solutions for overcoming poverty.   The winning collaboration will receive up to $200,000 a year and may potentially be renewed for up to five years, to sustainably reduce the number of individuals in poverty in the area of northwest Springfield, approximately within the Zone 1 boundaries (see map), through a systems change approach.   As of Jan. 8, several finalists have been asked to submit full proposals, which will be reviewed by The Northwest Project volunteer grant panel. The grant will be awarded soon.

CU Community Credit Union and the City of Springfield held a press conference in December 2015 to announce the credit union's Fresh Start Loan Program, a more affordable alternative to traditional payday loans, to provide much-needed relief to people struggling in the payday loan debt cycle. The U.S. Treasury awarded $1,988,750 in grant dollars to start the program.

Thrivent Financial announces $80,000 to help those living in Zone 1


The Springfield affiliate of Habitat for Humanity received a $29,000 grant from Thrivent Financial to help fund a Habitat house in Zone 1. A wall-raising ceremony for the home will be held at 4 p.m. Jan. 12 on North Builders Circle. The home, which will house a single father and his daughter, is expected to be complete March 31. Thrivent is also granting Convoy of Hope $50,000 to expand its "Elevate" pilot program to resource 27 church congregations within the nine identified neighborhoods in Zone 1.

A citizen task force led by community leaders Charlie O’Reilly and Lynn Thompson will announce its recommendations to the Mayor and City Council at the Jan. 19 City Council Lunch.  Mayor Bob Stephens announced the formation of the task force in September 2015. Describing the numbers of people in need of immediate shelter, as “mind boggling,” Stephens said the lack of crisis shelter facilities in Springfield has reached a crisis level. Long-time philanthropist and community leader Charlie O’Reilly has stepped up, alongside business owner Lynn Thompson, to co-chair the task force, which has a charge from the Mayor to bring back recommendations within 60 days of the first meeting. The group’s plan should (a) provide additional crisis shelter units for families and/or (b) reduce the number of families placed in this crisis situation with a goal of meeting the current need. Read the task force's recommendations here.