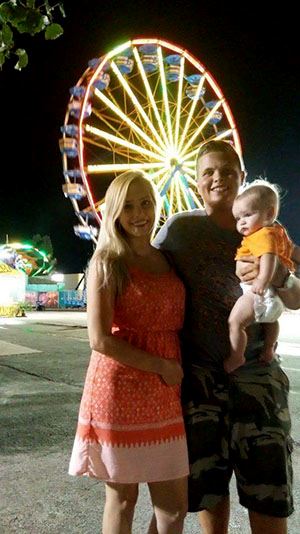 Alexis Fidell looks back on her last two years of high school and can’t believe how much her life has changed.

The 21-year-old is not the same person she was just couple of years ago. In fact, her life couldn’t be more different.

Once a couch-surfing teen with several outstanding tickets and a substance abuse problem who attended five area high schools before graduating in 2013, Alexis now lives in Ozark with her boyfriend Jesse and their 7-month-old, Wyatt.

“I’m happy with where my life is headed now,” Alexis said. “It (being homeless) was scary sometimes. If I hadn’t gotten help when I did, I really think I’d be dead or in prison by now.”

When Jody Austin, a probation officer with the City of Springfield’s Municipal Court, met Alexis, she knew right away that the young woman’s life was spiraling downward.

“She had two speeding tickets, a C&I (careless and imprudent driving) charge, a couple of minor-in-possession tickets and a stealing charge,” Austin said. “She had no money to pay her fines, no driver’s license, no job, no stable housing and was sleeping at a different friend’s house every night. She also had no self-confidence whatsoever and didn’t know where to turn for help.”

At one of her Municipal Court appearances, the judge asked Alexis if she wanted help. She said yes.

“From there, we hooked her up with I Pour Life, a local nonprofit that offers free life-coaching services to young women. We helped her get her Social Security card, and we got her into the Homeless Court program,” Austin said.

Springfield’s Homeless Court, a collaboration among law enforcement agencies, the courts system and several local social-service agencies, got its start in early 2015. Alexis was one of the program’s first “graduates.”

“Homeless Court is a treatment court, so it resembles a counseling session more than a court session. The courthouse atmosphere can be a barrier to some defendants, so having our sessions away from the courthouse can improve participation,” says Greene County Associate Circuit Court Judge Becky Borthwick, who previously served as a Springfield Municipal Court judge.

The court operates similarly to a drug court or mental health court, but in Homeless Court, defendants have the chance to work off their fines with accomplishments such as maintaining housing, obtaining life-skills training, attending AA/NA meetings, attending computer and literacy classes, training or searching for employment, and/or obtaining medical care and/or mental health treatment.

“We are checking up on them (the defendants) to make sure they are going to their doctor’s appointments, taking their medication, going to their meetings and staying in compliance with the program,” Judge Borthwick said. “If we can help one or two people, that is one or two we have kept out of the Greene County Jail and off the street,” she added.

Homeless Court convenes at 6:30 p.m. on the first Tuesday of each month in a conference room at The Kitchen, 1630 N. Jefferson.
Alexis began attending the program in February 2015 and “graduated” that July, having worked off about half of the more than $400 in fines she owed. By that time, she had an apartment, a job, her driver’s license reinstated and was clean and sober.

“It was a good environment – you knew that you were among people who also wanted to change,” Alexis said of the program. “They really helped me get on my feet.”

With her legal problems taken care of and her life on track, Alexis says family life, work and staying sober is her focus now.

“She has embraced parenthood and wants to be a positive role model for her son,” Austin said of Alexis. “She is determined to not repeat the cycle.”