Springfield Public Works constantly works to improve traffic flow and safety. New intersection safety measures may not always be popular with drivers initially, but can have a big impact on everybody's safety.

The City of Springfield, Missouri was the first in the northern hemisphere to build this type of intersection. Today, MoDOT  has built five DDIs on Springfield's State Routes and they have proven themselves to be very effective in relieving congestion and eliminating severe crashes. A 2-year before-after study of Springfield DDI locations has shown that the typically severe angle crashes have been reduced by 90% percent. As expected with a curvy roadway, lane-change and lane departure crashes have increased. However, overall crashes have gone down by about 30% and injury crashes have dropped by almost 60%.

Further, Diverging Diamond Interchanges can move traffic much more efficiently than a conventional interchange: While it used to take 8 different signal phases to give each approach their turn, now there are only two signal phases needed to serve all directions. 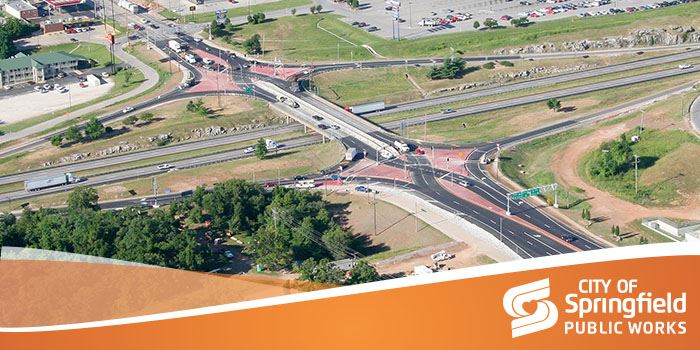 There are multiple roundabouts within the City Limits. Incoming traffic yields to any vehicles that are already in the roundabout, a very straight forward concept. Roundabouts can be used for traffic calming, forcing drivers to slow down, but they can also increase the flow traffic that would otherwise be waiting at a signal or an all-way STOP. However, the most important benefit of a roundabout is the safety improvement it brings: Collisions in roundabouts are rare and they eliminate the risk of high speed right-angle crashes that are typically the most dangerous crash type.

Traffic circles are much smaller than roundabouts and are usually designed be driven over by larger vehicles that could otherwise not make the turn, such as delivery trucks. They also are considered a traffic calming device and safety improvement.

One of our biggest success story involves the roundabout at Oak Grove & Catalpa that was constructed in 2015. This previously off-set intersection saw many severe crashes. In the two years before the improvement, there were 17 reported crashes, including a fatality. The economic loss to society was 2 million Dollars in 2012 & 2013. To compare, in 2016 & 2017, in the two year after construction, there were only 3 crashes reported, totaling to an estimated economic loss of 32,000 Dollars.