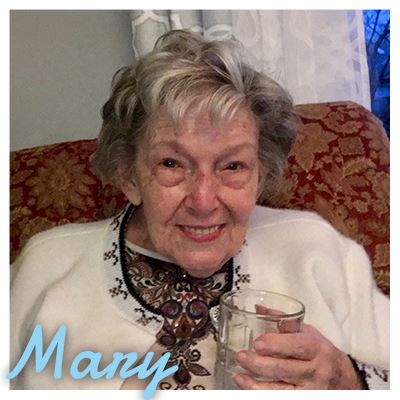 "Mother of 5 sons, excellent cook and seamstress, who always wanted to learn new things even at 95 years almost 96.

After a full and adventurous life, Mary Louise (Hood) Edwards was sung to heaven March 19, 2020 surrounded by family. Born June 27, 1924 in Fullerton, California, to Carl and Marbye (Curtis) Hood, she was raised in Chino, California. As a child of the Depression, she learned early to cook and can, sew, garden, and improvise. She had many happy memories of outdoor play with her brothers and sister and making their own fun with games and singing.

At 18, Mary met a handsome Army soldier, Harold Edwards, who was visiting with his buddies who were attracted to a group of young women being chaperoned by Mary’s mom, too short to be noticed by the servicemen. It was always a debate about who whistled at whom first. Ed and Mary had a short courtship through letter-writing, and she traveled alone by train cross-country to New York, where she worked and lived with Ed’s family prior to their marriage New Year’s Eve 1942. They had three sons and after the war, settled in Southern California, where two more sons were born.

Highly adept at cooking, sewing and tailoring, floral arranging, and hospitality, Mary taught these skills to her sons. She also volunteered as a Cub Scout leader and a sponsor for a Vietnamese family in addition to supporting educational efforts in Ghana. Her lifelong curiosity and interest in learning continued through her sales job at JC Penney, traveling extensively, playing the organ (self-taught), fiercely competing in board and card games, and reading.

After Ed’s death in 2015, she and her beloved companion, Princess, moved from her native California to be closer to family in Springfield, MO, where she lived at Creekside at Elfindale and Morningside East.

Mary was preceded in death by her husband Ed, sons Kenneth and Gary, granddaughter Rebecca, and brother Robert, a Ranger in WW II. Carrying on her legacy of strong family commitment and service to others are Richard (Sonia) of Guatemala, Dennis (Molly) of Springfield, and Douglas (Lynn) of Santa Clarita, California, brother Clifford (Pat) Hood and David (Eleanor) Hood, sister Dorothy Riebli, and 16 grandchildren, 30 great-grandchildren, and 19 great-great-grandchildren."